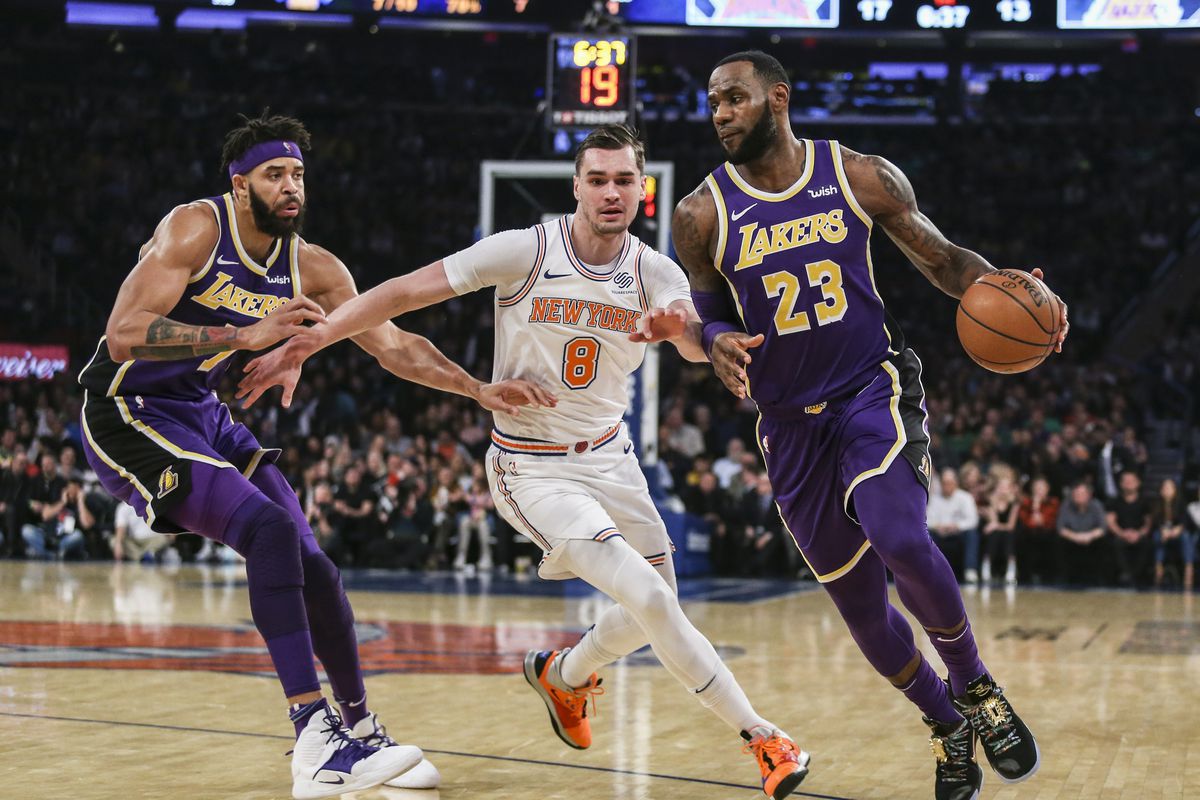 A pair of major market teams take the floor in interconference action on the hardwood in the Big Apple. The Los Angeles Lakers are on the road as they make the trip to face the New York Knicks Wednesday night. Los Angeles was clobbered 139-107 on the road by the Celtics Monday night in their last game. New York trounced Cleveland 106-86 on the road in their previous game Monday night. The Lakers own a 168-122 edge in the all-time regular season series between the teams, including a 117-87 romp at home in the first matchup this season on January 7.

Los Angeles was trounced by Boston in their last contest, handing them their second loss in their last three games. The Lakers entered Tuesday holding the top spot in the Pacific Division by four games over the Clippers. Los Angeles owned the top spot in the Western Conference, leading the Nuggets, Jazz and Clippers by four games. The Lakers were within three after the opening quarter but saw the deficit expand to 14 at the half. Los Angeles didn’t get closer than that in the second half and trailed by as many as 33 en route to a one-sided defeat. The Lakers shot 43.8 percent from the field, including seven of 26 from three-point range, and allowed Boston to shoot 55.9 percent in the game. JaVale McGee led Los Angeles with 18 points in the loss.
The Lakers are 7th in the league in scoring offense as they put up 114 points per game. Los Angeles is 15th in rebounding with 45.6 boards per contest and 6th in assists with 26.1 per game. The Lakers stand 7th in the league in scoring defense as they allow 106.4 points per night. LeBron James is second on the team with 25.2 points, 7.6 rebounds and 11 assists per contest this season. Anthony Davis contributes a team-high 26.6 points, 9.3 rebounds and 2.6 blocks a night while Kyle Kuzma chips in 13.2 points per contest. Avery Bradley, Danny Green, Dwight Howard and Kentavious Caldwell-Pope are among the role players that the team is leaning on to supplement their star duo. The Lakers are tied for 1st in the league in field goal percentage as they shoot 48.5 percent as a team. Los Angeles is 21st in the league with 11 triples per game while standing tied for 11th in three-point shooting at 35.9 percent from downtown.

New York Knicks Looking for Back to Back Wins

New York got back in the win column as they snapped a three-game skid by pounding Cleveland into oblivion on the road. The Knicks are in the basement of the Atlantic Division, 17.5 games behind the Raptors. In the Eastern Conference playoff picture, New York is tied for 13th, seven games behind the Nets for the final playoff spot. Against the Cavaliers, the Knicks were down one at the half but outscored the Cavaliers 30-14 in the third quarter to take control of the contest. New York shot 48.2 percent from the field, including nine of 23 from three-point range, and held Cleveland to 34 percent shooting in the game. Marcus Morris Sr. and Julius Randle (nine rebounds) each had nine rebounds in the contest.
The Knicks enter this game 28th in the league in scoring offense with 104.3 points per game on the year. New York is 8th in the league in rebounding with 46.1 boards a night while ranking 29th by dishing out 21.1 assists per contest this year. The Knicks are 19th in scoring defense by allowing 112.2 points per game this season. Rookie RJ Barrett is third on the team with 14.1 points plus 5.2 rebounds per contest on the year. Julius Randle (18.9 points, 9.2 rebounds), Marcus Morris Sr. (19 points, 5.4 rebounds), Kevin Knox II (7.4 points), Bobby Portis (9.9 points, 5.7 rebounds), Reggie Bullock and Mitchell Robinson (9.6 points, 6.6 rebounds, 1.8 blocks) are performing well in the new-look rotation for the Knicks this season. New York is 27th in the league in field goal percentage as they shoot 43.4 percent from the floor as a team. The Knicks are tied for 28th in threes per game as they knock down 10.1 triples per game while the team stands 25th in three-point shooting as they connect on 33.8 percent of their attempts from beyond the arc. Smith (oblique) and Morris Sr. (ankle) are both questionable here. Barrett sprained his ankle against the Suns January 16 and has been ruled out in this contest.

The New York Knickerbockers,[3][6] more commonly referred to as the Knicks, are an American professional basketball team based in the New York City borough of Manhattan. The Knicks compete in the National Basketball Association (NBA) as a member of the Atlantic Division of the Eastern Conference. The team plays its home games at Madison Square Garden, an arena they share with the New York Rangers of the National Hockey League (NHL). They are one of two NBA teams located in New York City; the other is the Brooklyn Nets. Alongside the Boston Celtics, the Knicks are one of two original NBA teams still located in its original city.

The team, established by Ned Irish in 1946, was one of the founding members of the Basketball Association of America (BAA), which became the NBA after merging with the rival National Basketball League (NBL) in 1949. The Knicks were successful during their early years and were constant playoff contenders under the franchise’s first head coach Joe Lapchick. Beginning in 1950, the Knicks made three consecutive appearances in the NBA Finals, all of which were losing efforts. Lapchick resigned in 1956 and the team subsequently began to falter.

It was not until the late 1960s when Red Holzman became head coach that the Knicks began to regain their former dominance. Holzman successfully guided the Knicks to two NBA championships, in 1970 and 1973. The Knicks of the 1980s had mixed success that included six playoff appearances; however, they failed to participate in the NBA Finals.

The playoff-level Knicks of the 1990s were led by future Hall of Fame center Patrick Ewing; this era was marked by passionate rivalries with the Chicago Bulls, Indiana Pacers, and Miami Heat. During this time, they were known for playing tough defense under head coaches Pat Riley and Jeff Van Gundy, making two appearances in the NBA Finals, in 1994 and 1999. However, they were unable to win an NBA championship during this era.

Since 2000, the Knicks have struggled to regain their former glory, but won its first division title in 19 years in 2012–13, led by a core of forwards Carmelo Anthony and Amar’e Stoudemire. They were eventually eliminated in the Eastern Conference semi-finals by the Indiana Pacers, and have failed to make the playoffs since.