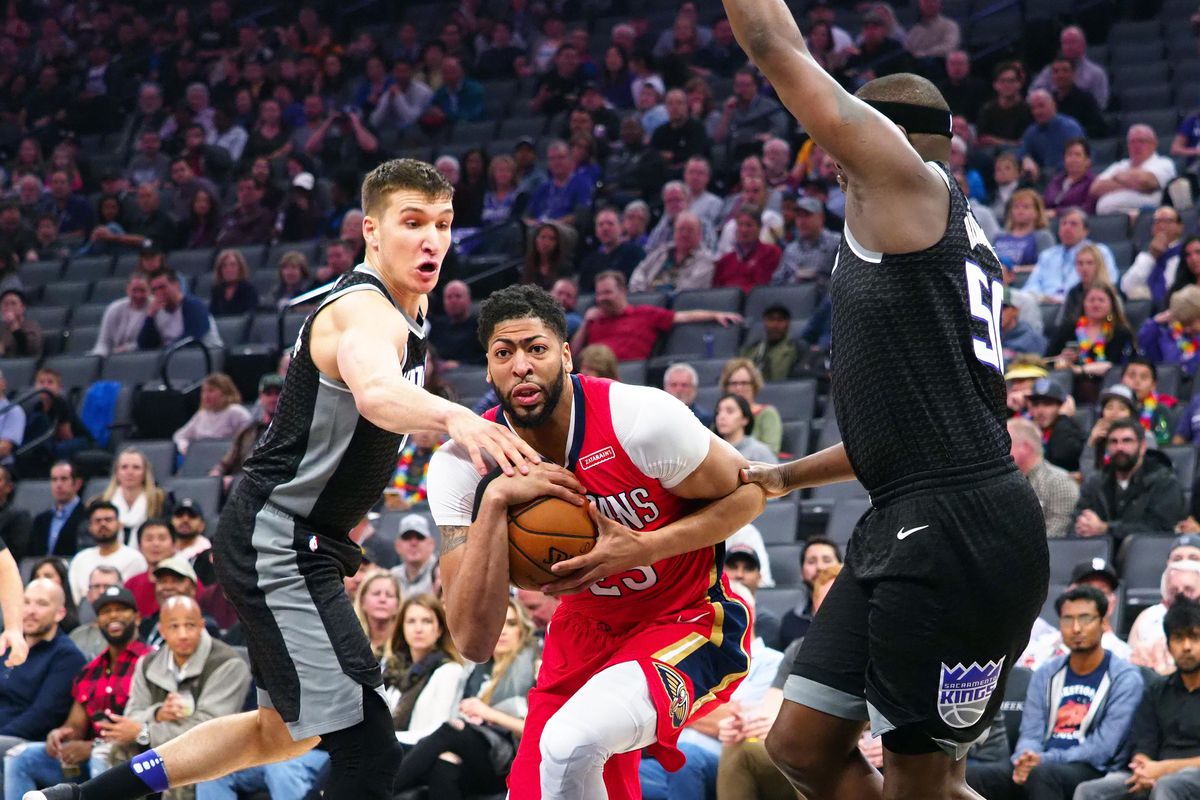 The youth movement will be on full display when the New Orleans Pelicans travel to California for a head-to-head meeting with the Sacramento Kings. Since putting an end to a three-game slump, the Pelicans have bounced back with consecutive wins over The Minnesota Timberwolves and Miami Heat. However, things haven’t been as smooth for a Kings team that has lost two of their last three games to the Toronto Raptors and Philadelphia 76ers.

A Holiday to remember

Pelicans guard Jrue Holiday made sure people remembered his name on Sunday night.
It’s easy to get lost in translation with a team with so many young and burgeoning stars. Rookie forward Zion Williamson remains the A-side of the ticket, and there is still a worldwide infatuation with Lonzo Ball and rest of the Ball family. Brandon Ingram is currently the leading scorer for the Pelicans. It’s an easy list to get buried on for even a talented veteran player like Holiday.

He let his play speak for itself by nearly posting a triple-double against the Timberwolves, finishing the game with a season-high 37 points, eight assists and nine rebounds. The Pelicans covered as 7-point favorites in a 120-107 shellacking.

Next on the itinerary is the Kings.

Despite having the fourth-worst scoring defense, the Pelicans have played better in recent outings with opponents averaging 112.7 points in their last three games. They can find solace in the fact that the Kings don’t wear the crown when it comes to scoring offense. The team is ranked 19th in the league in offensive efficiency, which isn’t good enough to scare the Pelicans’ struggling defense.

Williamson seems to get better with each outing. Hard times are ahead for the rest of the league when he reaches his full potential. He’s already a terrifying force as a student of the game. That force is capable of crushing a Kings defense allowing a 118.0-point scoring average.

After putting together a 4-1 run, the Kings had an opportunity to knock off the defending champion Raptors at home as 5-point dogs, but their perimeter defense failed them when it mattered most. They are neck-and-neck with the Pelicans in their bid to surpass the Memphis Grizzlies for the eighth seed in the Western Conference standings. So Sunday’s loss didn’t do them any favors as far as postseason odds go.
They’ll try to turn it around in Wednesday’s run-in with a dangerous Pelicans team. The impossible task of guarding Williamson now falls on a Kings defense that is allowing an average 47.9 percent shooting in their last three outings.

They’ll have to be more efficient on the offensive end of the floor to make up for the struggles on defense. The team is shooting 45.5 percent on the road and scoring an average 109.0 points per game. It’s worth noting that the Pelicans have the third-best 3-point shooting percentage in the league. That gunslinger approach is one they should consider after watching the Raptors light up the Kings for 19 3-pointers on Sunday.

The New Orleans Pelicans are an American professional basketball team based in New Orleans, Louisiana. The Pelicans compete in the National Basketball Association (NBA) as a member club of the league’s Western Conference Southwest Division. The team plays their home games in the Smoothie King Center.

The Pelicans were established as the New Orleans Hornets in the 2002–03 season when then-owner of the Charlotte Hornets, George Shinn, relocated the franchise to New Orleans. Due to the damage caused by Hurricane Katrina in 2005, the franchise temporarily relocated to Oklahoma City, where they spent two seasons officially known as the New Orleans/Oklahoma City Hornets. The team returned to New Orleans full-time for the 2007–08 season. On January 24, 2013, the franchise announced it would rename itself the Pelicans,[10] effective after the conclusion of the 2012–13 season. The Charlotte Hornets’ name, history, and records from 1988 to 2002 were returned to its original city to be used by the then Charlotte Bobcats franchise, which subsequently became the Charlotte Hornets, starting May 20, 2014.[1]

In 16 seasons of play since the original franchise relocated from North Carolina, the Louisiana franchise has achieved an overall regular season record of 610–686, and has qualified for the playoffs seven times. Their achievements include two playoff series victories and one division title.