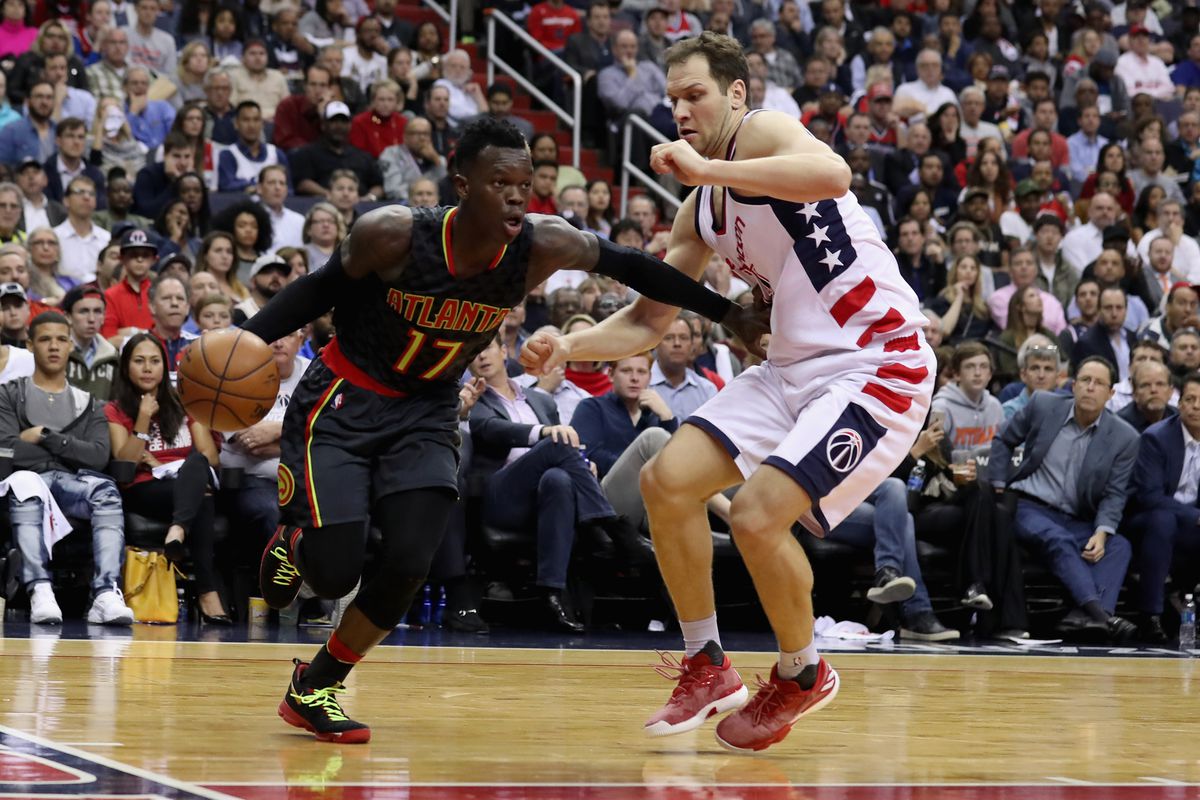 The Atlanta Hawks keep their sputtering defense on the road for a pit-stop at Rocket Mortgage Fieldhouse on Wednesday to take on the Cleveland Cavaliers. After dropping 140 points to defeat the New York Knicks, the Hawks got lit up on the road by a bad Orlando Magic offense. Recently acquired center Andre Drummond and the Cavaliers will be looking to do the same after dropping an ugly loss to the Los Angeles Clippers.

Will Capela really make a difference?

Few teams are capable of making the Magic look as good offensively as the Hawks did on Monday night. It was bad enough to make you wonder how much newly-acquired center Clint Capela can actually help. The Magic have the second-worst scoring offense in the league, and they still managed to heap 135 points on the scoreboard against the unsuspecting Hawks.
That isn’t to insinuate Capela won’t help at all. But there’s also the reality that he was traded from a Rockets team that was bad defensively with or without him. The Hawks won’t get to find out the answers until he is cleared to play after the All-Star break.

An opportunity to bounce-back against the Cavaliers on Wednesday should pique Atlanta’s interest for the time being. Cleveland will come into the game with the 24th-ranked offense in the league averaging only 105.7 points per game. The inability to deal with a monstrous center like Cleveland’s Andre Drummond does sweeten any pro-Capela argument.

It’s all about Trae Young and John Collins for the Hawks. Can the pair get hot enough to shoot Atlanta out of a jam? That lone question will mean the difference between winning and losing.

Drummond can’t save the Cavs

If there was any hope Andre Drummond’s arrival would spark something different in the Cavaliers, the team’s front office in Cleveland was sadly mistaken. The Cavaliers aren’t any closer towards a turnaround, and Drummond can’t be any happier playing for a team that’s even worse than the Pistons.
It’s a mess in Cleveland, and things don’t appear to be getting better anytime soon.

Drummond led the team with 19 points in his debut against the Clippers, which ended in an ugly 133-92 loss for the Cavaliers.

The level of difficulty should drop significantly in Wednesday’s showdown with the visiting Hawks.

For starters, the Cavaliers won’t have to worry about facing an elite defensive team. Opposing teams are averaging 118.8 points per game against the Hawks this season. Perhaps the Cavaliers will finally get a chance to get their offense rolling in the right direction with Drummond soaking up attention in the paint.

On the other end of the floor, the Cavaliers have the second-worst defense behind the Washington Wizards, but Drummond does bring a more dominant two-way presence than what the team had with Tristan Thompson as a starter. Slowing down Young and Collins will be the point of emphasis for the Cavaliers heading into the game.

Veteran forward Kevin Love is officially listed on the injury report as questionable for the game with an Achilles injury.

The Atlanta Hawks are an American professional basketball team based in Atlanta, Georgia. The Hawks compete in the National Basketball Association (NBA) as a member of the league’s Eastern Conference Southeast Division. The team plays its home games at State Farm Arena.

The team’s origins can be traced to the establishment of the Buffalo Bisons in 1946 in Buffalo, New York, a member of the National Basketball League (NBL) owned by Ben Kerner and Leo Ferris.[9] After 38 days in Buffalo, the team moved to Moline, Illinois, where they were renamed the Tri-Cities Blackhawks.[10] In 1949, they joined the NBA as part of the merger between the NBL and the Basketball Association of America (BAA), and briefly had Red Auerbach as coach. In 1951, Kerner moved the team to Milwaukee, where they changed their name to the Hawks. Kerner and the team moved again in 1955 to St. Louis, where they won their only NBA Championship in 1958 and qualified to play in the NBA Finals in 1957, 1960 and 1961. The Hawks played the Boston Celtics in all four of their trips to the NBA Finals. The St. Louis Hawks moved to Atlanta in 1968, when Kerner sold the franchise to Thomas Cousins and former Georgia Governor Carl Sanders.[11][12]

The Hawks currently own the second-longest drought (behind the Sacramento Kings) of not winning an NBA championship at 60 seasons. The franchise’s lone NBA championship, as well as all four NBA Finals appearances, occurred when the team was based in St. Louis. Meanwhile, they went 48 years without advancing past the second round of the playoffs in any format, until finally breaking through in 2015. However, the Hawks are one of only four NBA teams that have qualified to play in the NBA playoffs in 10 consecutive seasons in the 21st century. They achieved this feat between 2008 and 2017. The other teams that have made it to at least 10 consecutive playoff appearances in the 21st century are the San Antonio Spurs (1998–present), Denver Nuggets (2004–2013), and Dallas Mavericks (2001–2012).